I invited Sofía Hernández Chong Cuy as a guest blogger to contribute a report on the third edition of the Seminario Fundación Cisneros, held last month in Caracas, Venezuela. Sofia is the curator of contemporary art at the Colección Patricia Phelps de Cisneros. Originally from Mexico and living in New York City, she travels extensively within Latin America conducting field research for the collection. — ACG

After an hour-long traffic jam—not an unusual experience nowadays in the streets of Caracas—we finally arrived to Lugar Común, one of most interesting independent bookstores in Latin America. We were there because some of the foreign presenters participating in the Seminario Fundación Cisneros wanted to purchase books unlikely to be found abroad, and particularly to look into Lugar Común’s own publications, for the bookstore was established by a group of young writers, editors, and book connoisseurs who run a publishing house with the same name.

Traffic jam aside, it was a pleasure to take them there, since Lugar Común—located in Chacao, a municipality in greater Caracas known for its liberal politics and active cultural scene—was a collaborator in this year’s edition of Seminario Fundación Cisneros. This day-long-seminar, titled Promises of The Commons, addressed authorship, copyright, and access in contemporary art. It was organized by the Colección Patricia Phelps de Cisneros (CPPC), and took place on November 15, 2013 at the Universidad Central de Venezuela in Caracas.

In brief, the seminar’s umbrella topic was intellectual property, a frequently misunderstood and contested concept; hence, Lugar Común’s collaboration would become central. Prior to the seminar, they developed programming with local guest speakers and organizers of Promises of the Commons to introduce the seminar topic; and presented in their bookstore a shelf of reference materials on the topic, making available publications (provided by the CPPC holdings and otherwise unobtainable in the city) that anyone could browse and consult free of charge, library style.

It’s worth nothing here that easy access to publications is one of the many challenges facing the cultural field in Venezuela today. In an article for Publishing Perspectives last year, Julieta Lionetti explains the difficultly in importing publications there, and remarks that, “of the many islands that form the Spanish book markets, perhaps Venezuela is the most isolated.” Given this scenario, a collaboration like the one between CPPC and Lugar Común which may at first strike one as a simple action takes on a different meaning.

No doubt, context always inflects meaning. Take another case in point, one pertaining to the topic of Promises of the Commons: The basis of intellectual property may have a central concept and genealogy, but its interpretation and application means different things depending where an author is producing a work or, for that matter, depending where an author is re-producing another’s work. No doubt, too, addressing intellectual property is complicated, at least in the art field. So, to offer some clarity before the seminar kicked off in Caracas, we teamed up with artist Nate Harrison and Paste.tv to create and distribute online a PSA-kind-of-video about intellectual property, specifically as it pertains to the arts. The video is fun and informative, both cool and a tool for specialized or general audiences. 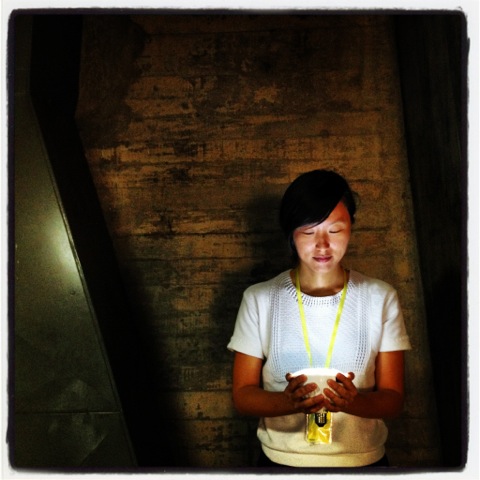 Other actions and collaborations were also set in place and held in advance of the seminar. Among them was the workshop “Contemporary Art and Intellectual Property: Appropriation and Copyright Law.” Conducted by artist and lawyer Sergio Muñoz Sarmiento, the workshop was designed for artists, curators, cultural producers and lawyers. It took place a week before the seminar in three different cities: in Buenos Aires, at the art department of Universidad Torcuato DiTella; in Bogotá, at the art department of Universidad de los Andes in that city; and in Caracas, at the CPPC headquarters. (Apparently, the participants in Buenos Aires were more for copyright, while the ones in Bogota for copy-left. There’s also copy-future, much debated in Caracas. More on this ahead.)

Indeed, community and institutional collaboration are central for developing contemporary arts programming—or culture in general. And basic activities done consistently, such as providing information, debating it and generating awareness, potentially creating new knowledge or perspectives around a subject, are central goals of the Seminario Fundación Cisneros. Started in 2011, this annual seminar is organized by the CPPC staff in its headquarters in Caracas and New York; Ania Calderon and Guillermo Ruiz de Teresa from Mexico City, as well as Ileana Ramirez from Caracas have served as advisors in the last two years. The seminar’s first edition, Piet Mondrian: Parallel Readings, focused on Latin American geometric abstraction; its second edition, The Betrayal of the Contemporary, taking place last year, focused on the present cultural landscape.

The Seminario Fundación Cisneros started as an academic conference; by the second edition, the format radically changed, including keynote scholarly lectures in addition to a series of short-presentations, specifically, Pecha Kuchas organized around thematic blocks. This new format, dynamic to say the least, allows for introducing diverse, new cultural production and distinct, emerging viewpoints by several influential artists and cultural frontrunners from the country and elsewhere. No less, it creates a hyper-stimulating creative environment. Talks have ranged from a fast-forward, critical history of Venezuelan cinema presented by Sergio Monsalve, to a slow-paced, poetic study of contemporary landscape by artist Suwon Lee.

At this year’s seminar, Promises of The Commons started with a keynote by Terry Fisher, a law professor at Harvard University, who presented the theoretical underpinnings of the three main positions on intellectual property—the fairness, personality and welfare theories—and added a new position, a cultural theory based on acknowledgment and collaboration. You can read an excerpt of a text by Fisher explaining this, or better yet watch the video documentation of his lecture at Promises of The Commons. The presentations at the seminar varied significantly in approach to copyright, introducing controversial subjects such as patrimony and weird ones like brainwashing. For example, the American artist Jill Magid focused her presentation—in like manner of her narrative-based conceptual performances—on an ongoing project she’s developing about the archives of Mexican architect Luis Barragán, whose holdings, now in a private foundation in Switzerland, include those of copyright, or so deem their owner. For his part, Willy McKey, a Venezuelan poet, questioned the media for inserting content into his brain, programming him to repeat it as if willfully, and along the way incited the hundreds of audience members in attendance to chant along a song of an early twentieth century soap ad. The room turned into a concert hall, then McKey raised the question to the room of whether it mattered that a digital server somewhere has stored our entire histories, of whether who, and if it mattered, would be charging copyright at their playback. These are only three of a total of 12 presentations, not counting the group conversations and dialogues that were also staged as part of the day’s program. Hopefully this gives you a sense of the seminar’s program.

If you’ve watched the videos hyperlinked above, you’ll probably notice that these are not typical documentation for a cultural event—TED Conference aside, perhaps! The videos of the seminar were produced by Venevision, the television network that is part of the media conglomerate Organización Cisneros, sister organization to Fundación Cisneros. With their crew of TV experts and a tech set-up including various cameras and professional editing equipment during the event, these videos were captured and edited on the air and on site, as if it were a live talk show, and were simultaneously broadcast via online streaming through the CPPC website.

To disseminate this, in 2012 the CPPC formed an International Network, which involved partnering with cultural organizations throughout the Americas, who convened their public to watch and respond to the seminar via live-stream. Many people gathered and experienced the seminar this way, and many others experienced the seminar from their personal, school or office computers. The use of social networking tools have also been strategically used during the seminars; for example, a group of guest Digital Correspondents post reports on Twitter informing audiences (local and abroad, physically or virtually present at the seminar), incentivizing conversations about the seminar topics, and receiving questions to be posed in the auditorium to the presenters on stage.

All efforts are made to make the seminar digitally accessible, for accessing the event there and then or from elsewhere and afterwards, but it’s certainly recommended to be present in Caracas: the program is great, and the presenters are accessible throughout the day for public questions or can easily be approached during break times. The quality of the audience also makes it for the experience; it consists of local artists and intellectuals, professors and their students, engaged in the cultural developments in Venezuela. The seminar makes an environment not only for learning, but also for cultural exchange and professional networking. This is why the CPPC offers grants to subsidize travel for interested audiences that live in the interior of the country.

It may also help to say that the setting for the Seminario Fundación Cisneros is an inspiring place, a modernist architectural jewel. Designed and constructed in the mid-twentieth century by the Venezuelan architect Raúl Villanueva, the campus of the Universidad Central de Venezuela in Caracas is considered by UNESCO a World Heritage Site. The seminar program includes guided walkthroughs with leading architectural scholars, including Professor Rafael Pereira. And his campus walkthrough is certainly a highlight of the program, and a lure for foreign presenters to come—as it is being accompanied by local artists like Dulce Gomez, Luis Molina Pantin, and Luis Romero to an early morning hike to el Ávila, to the Metro Cable public transportation system, or to visit art galleries in Los Galpones and La Trinidad. Certainly, the one drawback of moving around Caracas is its hours-long traffic jams, which have increased in recent years, making evident the pressing need for the development of an integrated public transportation system, and of more thoughtful urban planning in general. For a start, it would help that the taxi services—most of which are part of the city’s increasing informal economies—were organized, with a map on hand and networked among drivers, to say the least.

The fourth edition of Seminario Fundación Cisneros takes place in Caracas on November 2014. You can join the CPPC mailing list to keep abreast of its developments, and learn about related activities: www.Coleccióncisneros.org.