A few weeks ago I was invited to speak at the Yale School of Management as part of the Becton Distinguished lecture series. It was an honor to share my thoughts with such an impressive group of graduate students as well as with Dean Edward “Ted” Synder  and my host and interviewer Tim Collins. What follows is the video of the lecture itself as well as the interview for Yale Insights on the topic of innovation and family businesses. I hope you enjoy it.

In conversation with Tim Collins

Conglomerates have a reputation as lumbering beasts that have difficulty adapting to a changeable global economy. Can a Conglomerate Be Nimble?Adriana Cisneros, CEO of the Cisneros Group, talked to Yale Insights about her family’s 88-year-old company, which is built to capitalize on continuous change and stay on the edge of the trends shaping Latin America.

From a trucking company to Facebook’s digital ad rep in Latin America. From Pepsi bottling to satellite TV. Clearly the Cisneros Group hasn’t relied entirely on organic growth. The privately owned business, founded in Venezuela in 1929, has reinvented itself numerous times as it bought and sold interests in manufacturing, consumer products, grocery stores, real estate, media, entertainment, and, more recently, digital advertising solutions. When Adriana Cisneros took over as CEO in 2013, she became the third generation of the Cisneros family to lead the company.

Cisneros talked with Yale Insights about leading a nimble conglomerate serving Latin America and U.S. Hispanic markets. The challenge of working throughout Latin America is significant. As a report from the St. Louis Federal Reserve noted, “the differences within the region can easily dwarf the differences between the region and the U.S.” But Cisneros described a company where change is part of the DNA. A small core team ensures that the group remains on the cutting edge while managers with expertise in each country and each industry lead the dispersed businesses.

The themes of adaptation and reach are both clearly visible in one of the Cisneros Group’s oldest verticals: entertainment. Going back to the 1960s, the company’s production companies have been part of making Venezuelan telenovelas a global phenomenon. In 1992, the Cisneros Group was part of a $550 million acquisition of Univision; in 2007, the Cisneros sold their share for $13.7 billion. The move looks prescient now; Univision has seen a recent ratings slip, according to the Los Angeles Times, in part because “telenovelas, whose stories unfold slowly over six months, five nights a week, run counter to video clips and other short bursts of entertainment popular among young audiences.” Meanwhile, Cisneros Group has been expanding a new creative production unit, MOBIUS.LAB Productions, that targets audiences’ multi-screen viewing habits.

Q: Your company is large and has been around a long time, but change seems to be part of its structure. How does that work?
We’re really good at understanding where the markets are, and where the technology is, and mapping out where we want to be for the next 10 years, and then we pivot to new opportunities.

Across our more-than-85-year history, it would be very difficult to define us by industry. We like to read the pulse of where we are as a continent and see new opportunities.

When we spot one, we’ll do the deep dive required to create a new vertical. Our business currently has three divisions: media, interactive, and real estate.

We’re venturing into the renewable energy business now. Fifteen years ago, that sector would have been too uncertain in Latin America for anyone but an expert willing to take a risk. Today, the hard work has been done for it to be a safe bet for us.

Q: How do you create teams that can work in this framework?
We have a core team of generalists—my SWAT team. It’s eight to ten people who focus on trends, analyzing business opportunities, closing deals, and ramping up new ventures. Once things get going—which could be weeks or months or years—we turn the business over to specialist teams that run it long term. This model was started by my grandfather, and perfected by my father.

We also use a method IBM has used going back to the 1970s. When we’re troubleshooting problems or feel that we’re losing our competitive advantage, we will really mix things up. I’ll put together a multidisciplinary team pulling from different units. I’ll grab an engineer from Venezuela, a lawyer from our Miami office, and one of our script writers and have them work on a content issue that one of our pan-regional cable channel is facing. We’ve found it really instills a lot of innovation.

Q: Could you describe the media division?
We own TV networks and cable channels. In addition, we produce content in Spanish, but it’s currently distributed in over 100 countries and 12 languages. We’ve distributed our content worldwide since the 1960s. We were doing it way before Netflix, but the more platforms that are created, and the better that internet penetration gets, the further our content is able to travel.

Q: How do you go about producing content that will appeal around the world?
In the early days, we just produced content in Venezuela. It travelled really well worldwide, because it was very high quality content. We were the best at soap operas at a time when not a lot of people were doing soap operas, and not a lot of people knew how to sell content internationally. That gave us an edge.

Fast forward 20 years, and we started producing content that had pan-regional appeal. Everybody could identify with the story, whether they were Chilean or Colombian. We had actors with mixed backgrounds and workshops to teach them to speak a very neutral Spanish without an accent from anywhere.

With the advent of Netflix and access to great content from around the world, audiences started being okay with heavy accents again. It was okay for content to feel hyper local. Who would have thought one of the best performing shows on Netflix would be Merlí, a series from Spain, in the Catalan language, and about a high school teacher that teaches philosophy. It’s very telling of the time we’re in now, in terms of entertainment.

So now in the productions we’re doing, they’re speaking very Venezuelan Spanish and everything about it feels authentically Venezuelan. It’s really fun; from the creative side it’s a dream come true.

In two years’ time, who knows what will happen? It’s very important to read these trends. And because it’s being distributed through digital platforms you can see who’s watching what in each country. And because the data comes in immediately, you don’t have to wait until the end of each season the way you used to. That’s starting to really inform the way that we plan what to produce and when to produce it.

Q: Do you actively try to get your content into new markets?
I’m producing with the U.S.-Hispanic market, number one in my mind, and the Latin American market, number two. What happens after that is extra. We’ve never looked to expand into more markets. Other markets come to us to buy our content. We do participate in the fairs where content buyers and sellers come together. But it’s the buyers who decide to dub or subtitle our shows. That’s how our content ends up being distributed worldwide. I’m never producing with a Korean or Chinese audience in mind. That would be really difficult.

Q: What does the interactive division do?
We have built one of the largest digital ad networks for Latin America and the U.S. Hispanic market. We specialize in monetizing digital traffic across all platforms.

Recently we started representation of Facebook for Latin America. We’re opening their offices in Paraguay, Bolivia, Ecuador, and Venezuela to sell all their advertising in those countries. Since it’s not just Facebook but Instagram, WhatsApp, Messenger, and Oculus, it’s a suite of products we get to represent. That makes it really appealing for advertisers to start creating more and more interesting campaigns that work across all these platforms.

Obviously in the U.S., Facebook has been selling advertising to clients for a long time. In some of the countries in Latin America they haven’t. In those cases, we’re educating our clients about what type of advertising works on Facebook. Or how they can adapt an ad that was created for a television spot into an ad that can work on Facebook.

Advertising strategies are starting to need ads that work together on TV and digitally to tell a single story because so many people watch TV with their phone in their hands. It’s fun to figure out how to do a campaign that works on both screens simultaneously.

When we launched the interactive vertical, it was because we recognized how little of the online traffic was being monetized. There were companies working on it country by country, but nobody had figured out how to do it at scale. Our history is all in creating pan-regional businesses, so we launched our ad network pan-regionally from the beginning. We opened 12 offices in nine countries in six months. That gave us the ability to really claim the space quickly. It gave us scale, which makes it interesting for big clients like Starbucks.

Q: You are working across Latin America. Is it possible to use a one-size-fits-all model for the region?
Never. We have always worked in every country in Latin America, and we’ve been able to do it because we understand that each country is very different. Part of our advantage is that we’ve been nimble enough to negotiate the differences in jurisdiction and financial services. We roll up our sleeves and deal with those differences and understand that there isn’t a turnkey solution.

Too often companies don’t understand they need to design a different strategy for every country, that you actually need a different set of lawyers and accountants for every single country that you’re going to step into.

It takes a really long time. It requires the will and perseverance to treat every country individually, but you can get it done, and once you have everything sorted out, you can run the businesses as one. But it takes a while. You have to be patient, but I’m good at that.

Q: What role do governments play in what you are able to do?
Latin America is very different than the United States. In Latin America, when governments change, sometimes even the change of a minister, the processes may well have to start from zero. The paperwork may have to start from zero. But it’s just the way that things are there; it’s the cost of doing business.

Q: How do you approach a new vertical?
You need a series of things to line up. To use wind power as an example, in order for you to make a good decision you have to have data about wind patterns in each location. Ideally, more than 20 years of data. People only started measuring wind in Latin America 20 or 30 years ago. So 15 years ago, it was an interesting idea, but extremely risky. Now there’s a lot of data out there and some people did make those early bets.

In addition to good information, you need a really good partner that is a specialist. And we found that. And then you need to understand which governments are serious about making the proper investments in the space. When all those things come together, then we look at moving ahead.

We’re seeing all the elements in Argentina. The government is committed. They are putting together very good tenders in the renewables space. There’s enough data. And we’re finding partners that know what they’re doing. So we moved ahead. And we’re replicating that model in a few other countries, and with other technologies. 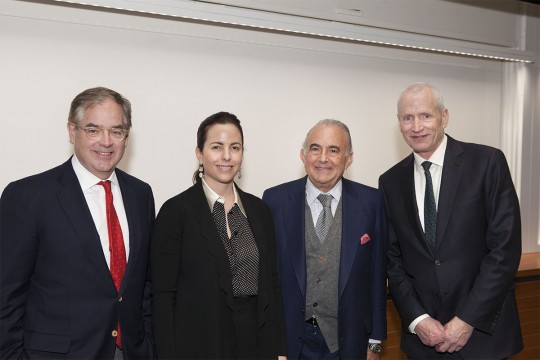