On Wednesday, April 3, the Colección Patricia Phelps de Cisneros held its launch of the eBook editions of the Conversaciones/Conversations series at the Morgan Library. As the sun set and the light through the atrium glass dimmed, the projection of highlights from both the print and digital publications appeared above the lively crowd who were inspecting the books at closer range on iPads stationed on podiums throughout the space. 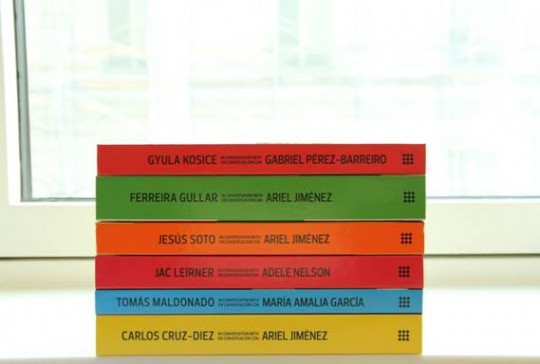 The series of in-depth conversations between luminaries of the Latin American artworld thus far includes the artists Jesús Soto, Gyula Kosice, Tomás Maldonado, Jac Leirner, Ferreira Gullar and Carlos Cruz-Diez; a conversation between Liliana Porter and Inés Katzenstein will be released soon. They are available in print as well as digital format. The assets available in the eBook versions bring the conversations to life. They include features such as exclusive live interviews with the artists, additional documents from their personal archives, video footage that shows kinetic works in action, virtual studio visits, and complete manuscripts and manifestos related to the artists. Everything has been very carefully chosen to complement the already considerable material available in the print editions.

Here’s a screenshot showing an embedded video of a studio visit with Cruz-Diez by Ariel Jiménez that is included in Carlos Cruz-Diez in Conversacion with/en conversación con Ariel Jiménez:

The CPPC worked with MAPP editions in London to produce the editions, and we were fortunate to have Michael Mack, MAPP’s founder, present for the celebration. He’s a veteran in art-and-photography print publications, but decided to start MAPP editions, devoted to eBook publishing, soon after he saw how people were reacting to the iPad. He realized that new technology would change the way people read, and would also be a way to bring books to a new, wider audience because they would sidestep the expensive and often complex production and distribution of paper books. He is the perfect partner for this venture, since the CPPC also is dedicated to disseminating information produced with high production values to a wider audience at an affordable price. The eBooks will make access to Latin American culture easy for anyone in the world with an internet connection.

Available as a free sample or a full download for $9.99 on iTunes for iPads: https://itunes.apple.com/ (Kindle, Nook and Kobo versions are forthcoming)

Here is a commercial produced to advertise the books: