Recently, I had the honor to participate as a panelist at the The Paley Center for Media’s Global Forum, where we discussed the new trends in technology and the changes we are experiencing in the information, entertainment, telecommunications and advertising industries.

During my panel I talked about my personal views about the changes in the mass media, mainly in Latin America, and the role of content producers such as the Cisneros Group.

My presentation of a live stream from the Paley Center for Media channel, with a brief introduction by Pat Mitchell, President & CEO. 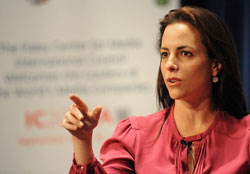 During my presentation: “Latin America: Creating Content For A Growing Market In The Spanish Speaking World”

I think that the entertainment industry is evolving quickly and through innovation it is leaving behind the traditional means. Through innovation and technology we are achieving a much closer interaction with the viewers, listening and understanding their needs much better and adjusting to the viewer’s demands

We are witnessing a parallel revolution in the Spanish language sector. There are more than 500 million Spanish-speaking people in the world, That means Spanish is the most spoken language and the third most used on Internet.

2010 was a turning point for the strength of social networks in Latin America, where 95% of Internet users have an account with at least one social network. Twitter penetration in Brazil and Venezuela was 21% of the online population, Latin America overall has had over a 300% growth in visitors to Twitter since 2009. Facebook had 5.6 million new users in Latin America.

Beyond the numbers, I wanted to make an important observation; the quality of content, new digital platforms and being in markets with great potential, such as Latin Americas, are 3 major factors rapidly changing our current reality.

In addition you can click the link to see more pictures of the event and a transcript of my presentation.