In the media world the topic that has dominated every conference and news headline for the past two years is OTTs and how they are changing consumption habits and affecting the traditional distribution channels.  Netflix and Hulu now have competition from services like HBO Now and Showtime which allow to you pay for these channels individually without needing a cable subscription.  While everyone has finally accepted that this new model is THE model, what they don’t realize is that the game just changed again and it has nothing to do with bundles and distribution, but with technology and form.

Overnight, Virtual Reality has become the single largest disruptor in media since we transitioned from radio to television.  Most of us associate VR with teenagers wearing goggles attached to their gaming consoles playing violent games for hours on end.  But the field of Virtual Reality has evolved so quickly in the year since Oculus Rift was bought by Facebook and has now become the most powerful viewing platform we have ever encountered.

While the VR gaming industry continues to thrive, the new players in town are the content makers who are not inventing new worlds but finding ways to create a fully immersive experience of our real world.  They have mastered how to imitate the way our eyes see and how our ears hear.  When you watch a virtual reality film you do not watch passively, you are completely and fully immersed in the world you are viewing.  Do you remember the first time you saw an IMAX film in 3D?  Well…this is 100 times more powerful. From the moment you put on your goggles you have a complete 360° experience. If you turn your head you see the world passing by you, behind you, just like in real life.  There are a handful of filmmakers producing beautiful VR  films already and one can only imagine all the commercial applications  that something like this can have in the world of real-estate, consumer goods etc.  You Tube and the NYT have launched big campaigns to promote VR content on their platforms and goggles made out of cardboard have suddenly made this into a very affordable experience.

Just imagine for example how VR could change the landscape of education.  Imagine, any child studying Africa will be able to visit a Massai village and experience their world without having to leave their classroom. A third grader learning about global warming will be able to visit the North Pole and see the vanishing glaciers. We are taking the inverted classroom model to another dimension.  Text books and websites now have the possibility of morphing into fully immersive experiences.

My good friend Rob Holzer, Founder and CEO of Matter Unlimited is creating short films to help his nonprofit clients be more effective in their fund raising. The results have been astounding.  He recently showed me his latest project that he produced with the Clinton Foundation and it brought tears to my eyes. I was totally moved and overwhelmed by what I saw. Not only because of the film but because I realized right there and then that the world as we know it had just changed. I can only say that you have to try it to experience the magic of it all!!! 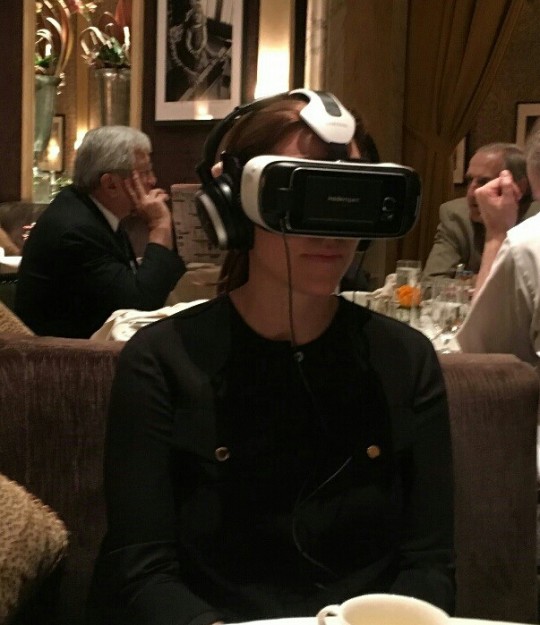 1)     Purchase or borrow a friend’s cool headgear. The options for viewing, while currently limited, will be plentiful and accessible and will be sold at a variety of different price points. Already several options exist.

Google Cardboard: The simplest — and most affordable — way to experience virtual reality. A foldable cardboard mount with plastic lenses and a fastening device, into which a smartphone is slotted horizontally, (these require a compatible app). Perhaps you received yours in last weeks’ Sunday NYTimes.

Oculus Rift: Powered by a PC, making it more robust than the Gear VR. Its positional technology gives users a wider range of physical interaction with the virtual environment, allowing them to crouch down and dodge bullets, for example.

HTC Vive: Developed in conjunction with Valve, the creators of video games like Portal. The headset plugs into a PC, and two base stations encourage users to move around a 15-foot by 15-foot area as their actions are replicated in the virtual environment.

PlayStation VR: Designed to work with the PlayStation 4. Unlike the other entries, it creates two sets of images: one for the headset and one for a TV, so virtual reality can be more of a communal experience.

2)     Choose a topic that sparks your interest. Browse the VR content universe and   download on your phone.

4)     And now you are ready to experience the world in a whole new dimension.