A few years ago, I was approached by IESA, Venezuela’s leading business school asking to write a case on the Miss Venezuela Organization, a franchise we have owned for over 30 years. Today the Miss Venezuela beauty pageant is considered to be the most important televised event in the country and is recognized worldwide as one of the most successful beauty pageants. We hold the Guinness world record for the most titles including six Miss World, six Miss International and now seven Miss Universe. Congratulations goes to María Gabriela Isler who was awarded our 7th title this weekend at the 2013 Miss Universe event, held in Moscow.

I was intrigued by the request and very familiar with the business case methodology, so I met with the IESA team that would be writing the case and explored the idea further. I knew how valuable the Miss Venezuela brand is in Venezuela,   but I was curious as to how the IESA team would frame it so that it would be an interesting business case to teach.

We agreed to the study and gave them hours of interviews and access to our archives. The interesting thing for us was, that while the business professors and their research teams worked hard at understanding our business and formulating their case study, we started to realize just how great the potential was for the Miss Venezuela brand beyond the pageant.

Over the course of the next few months, as the case was being developed, we worked to see how we could take a one night TV event, often referred to as the “Super Bowl of Beauty” and turn it into something even more meaningful. We wanted to find a way of giving our advertisers premium exposure to their brands over the course of the year using the Miss Venezuela brand as a platform.

Fast forward a year, and the Miss Venezuela event has transformed from being a one night TV extravaganza to a thirteen week multimedia experience. We partnered with CIC Media and Sony Entertainment to create a reality show, “Todo por la Corona” (All for the Crown) that was aired on Univision, the US’s main Spanish language network and in every country in Latin America. We worked with P&G to do pan regional product integration working with 30 brands. We developed an app that had over 30,000 downloads and captured over 12 million votes the night of the gala. We also partnered with E! to produce and air a red carpet event which was distributed by DirectTV in HD throughout Latin America. Samsung was our technology partner; we also collaborated with Twitter and managed to become a global trending topic with the #MissVzla2013.

As in previous years, we offered the pageant candidates the opportunity to have a positive impact as volunteers or spokespersons through the Miss Venezuela social responsibility program. This year, we collaborated with four NGOs that work with children and adults with disabilities, allowing the candidates to have personal experiences in this field thus promoting the inclusion of people with disabilities in society. In addition, a percentage of the proceeds from the ticket sales for the live show were donated to these four organizations. AVESID, Socieven, Apoye and Goodwill. Other global NGO’s that the Miss Venezuela organization has partnered with are: UNICEF, Operation Smile and Caritas.

Collaboration is a powerful tool, it has been exciting and productive to be working with such strong brands to bring innovation and growth to our business! 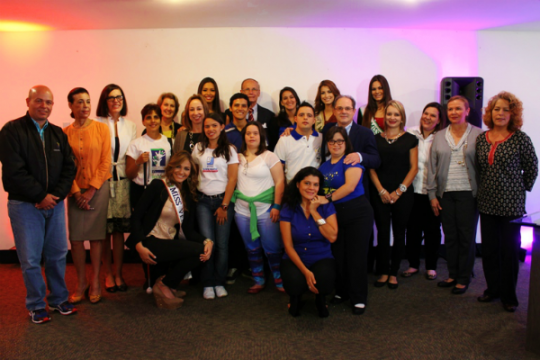